Skip to content
Foreign & Commonwealth Office Questions May 24th 11.30 am
MPs will have an opportunity to press the Foreign Secretary to attend the foreign ministers’ conference on the Israel-Palestine conflict in Paris and to urge him to support the French position – that if there are no talks by the end of this year, then France – along with many other European countries – may formally recognise Palestine.
MPs will be able to urge the Foreign Secretary to back the initiave at Foreign Office questions on Tuesday May 24th and during the Foreign Affairs debate later that day.
Britain has already been committed in principle to the recognition of Palestine since William Hague said in in 2012: “We reserve the right to recognise a Palestinian state bilaterally at a moment of our choosing and when it can best help bring about
peace”.
Middle East minister Tobias Ellwood has since made it clear that the current Foreign Secretary believes the best time to “play the recognition card” will be when it can be done  in co-ordination with other European countries so it has maximum effect.
He has also made it clear that “there will have to be a cessation of settlement activity while the process is ongoing” – ie the Israeli government will have to agree to halt settlement building before any talks can take place.
UK Foreign Secretary Philip Hammond (right) met the French president’s envoy to disc

uss the conference and received an invitation to the pre-conference discussion in Paris which is expected to be held in Paris in June.
Since 2012 the UK has been saying it recognises Palestine in principle and will announce its recognition “when it can best help bring about peace”.  If and when France recognises Palestine – with up to seven other European countries – it would be hard to argue that this was not the right time.
Last month the French government sent invitations to more than 20 foreign ministers for the meeting on the Israeli-Palestinian issue in June. Neither Israeli nor Palestinian representatives are invited.
The meeting’s purpose is to discuss the international peace conference that France wants to host in late 2016. France wants the foreign ministers to set an agenda for the conference and lay down principles for a resumption of the Israeli-Palestinian peace process.
French Foreign Minister Jean-Marc Ayrault (right) had talks with US State S 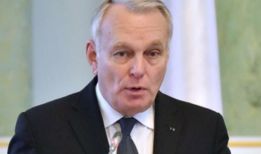 ecretary John Kerry last week and on Sunday met Prime Minister Netanyahu who has so far refused to attend the international peace conference later this year. If the talks don’t take place, France will – not automatically, but probably – lead a group of European countries in recognising Palestine.
These could include Ireland, Spain, Italy, Belgium and Luxembourg – who would join the ten European countries and 138 worldwide that already recognise the state of Palestine.
Far from being powerless, the UK is probably the country in the strongest position to lead along with France. The US won’t, especially now. The EU can’t, because it needs all 28 countries to agree.
If the UK government means what it has been saying for the last four years, it will join the French initiative and make it clear that the UK will also formally recognise the state of Palestine if Israel refuses to halt settlement building and take part in peace talks.
The alternative will be for the UK to sit on its hands and watch as the absence of talks leads to more disillusion with politics, more despair among the Palestinians and more violence on both sides.

Why is Netanyahu saying no?

Netanyahu’s resounding “no” to the French peace initiative has been strongly criticised in Israel – but mainly because it’s bad PR. Apparently it’s OK if he pretends to support peace talks. He doesn’t have to mean it.  As Asher Schechter wrote in the Israeli newspaper Ha’aretz:
“Why would Israel botch so badly what was clearly a rare PR opportunity? All Netanyahu had to do was agree to the summit, shake a few hands, smile for the cameras and then stall – just like Israel has done for more than a decade of failed negotiations. It’s just good PR: if peace is your stated agenda, you don’t reject an outstretched hand. You can stall all you like afterward, but, publicly at least, you say yes.”

Why is Netanyahu being disingenous?

Netanyahu’s offer to sit down to “unconditional” talks is disingenuous for 3 reasons: