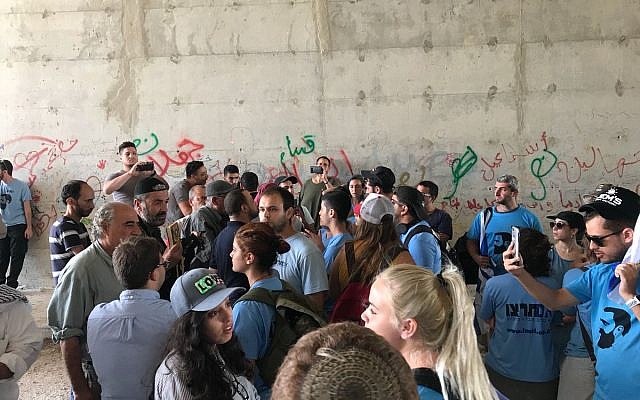 Busloads of supporters of the extremist Israeli organisation Im Tirtzu descended on Khan al ahmar on Friday to taunt the villagers after last week’s High Court ruling removing the last legal obstacle to the demolition of their homes.

Bulldozers are expected to move in as early as Wednesday of next week to raze the famous Bedouin primary school built of mud and tyres and the homes and sheep pens of the 180 residents to the ground. Another four Bedouin villages will also be demolished.

The High Court ruling clears away the legal hurdles, but does not oblige the Israeli government to proceed.  Strong international pressure could still persuade them to defer action or, better still, to let the Bedouins live in peace.

Over 50 British MPs have visited the village of Khan al Ahmar, including Ed Miliband and William Hague when he was foreign secretary, and over 100 have signed a parliamentary petition (EDM 1169 – see below) calling on the UK government to intervene.

Middle East minister Alistair Burt has visited the village on two occasions and has raised the issue with Israeli ministers many times, but British protests have ceased to have any influence on the Israeli government since they are never followed by any action. More than that, the Israelis believe that the protests are for public consumption and that ministers privately support what they are doing.

At a House of Commons debate on Khan al Ahmar in July the Conservative MP Sir Desmond Swayne said:  “By our refusal to act, we make ourselves complicit, don’t we?” Until earlier this year Sir Desmond was the minister responsible for the Middle East at the Department for International Development.

This gives the new Foreign Secretary Jeremy Hunt the opportunity to demonstrate the he will not be as supine as his predecessor and face up to the Israeli tactics by attaching a price-tag to the demolition of the village.

One persuasive argument he will hear from the Palestinian Authority is that it is not just the fate of 180 residents and about 170 schoolchildren that is at stake, but the future of the two state solution and the creation of a Palestinian state.

Khan al Ahmar occupies a strategic position on the narrow waist of the West Bank between Jerusalem and Jericho, known as planning area E1, where the Israeli government wants to build a wedge of illegal settlements to cut the West Bank in two and make it impossible to create a contiguous and viable Palestinian state.

The last four American presidents, Bush, Clinton, Bush and Obama, all made it clear to the Israelis that this was their red line.  No building on planning area E1.  But under Trump there are no red lines and nor is there any clear message from the British government.

Once the bulldozers have demolished Khan al Ahmar, the Israeli government will move quickly to bury the two-state solution in concrete, joining up the existing settlements until they have a huge settler city stretching across the West Bank.