British-made JCB diggers were seen at the village of Khan al Ahmar, which has been 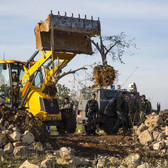 threatened with imminent demilition for the last four months to make way for the expansion of an illegal Israel settlement.

The prosecutor of the International Criminal Court has warned Israeli army generals that they could face charges if the demolition goes ahead as “extensive destruction of property without military necessity and population transfers in occupied territory” are crimes in international law.

Labour MP Paula Sherriff raised this with Middle East minister Alistair Burt in September and he confirmed in his reply that demolition would almost certainly be “contrary to international humanitarian law”.

“I assure you that the British Government is committed to encouraging and fostering respect for human rights among UK businesses,” he told her. Companies must “take account of” international human rights law.

JCB diggers have since disappeared from Khan al Ahmar to be replaced by Volvo, Caterpillar and Chinese-built Liu Gongs, but it was not clear whether  this was the result of action by the Foreign and Commonwealth Office or the company, based in Rocester, Staffs.

However during a private meeting with MPs of his party on November 18 Netanyahu said that Khan al Ahmar would be evicted “very soon – I shall not tell you when. We are preparing for it.”

The demolition of Khan al Ahmar will lead not only to the eviction of 193 Bedouin, including 86 children, and their school which serves five surrounding villages, but will also open the way for settlement building in the planning area E1 which stretches from Jerusalem to Jericho, cutting the northern West Bank off from the southern West Bank.